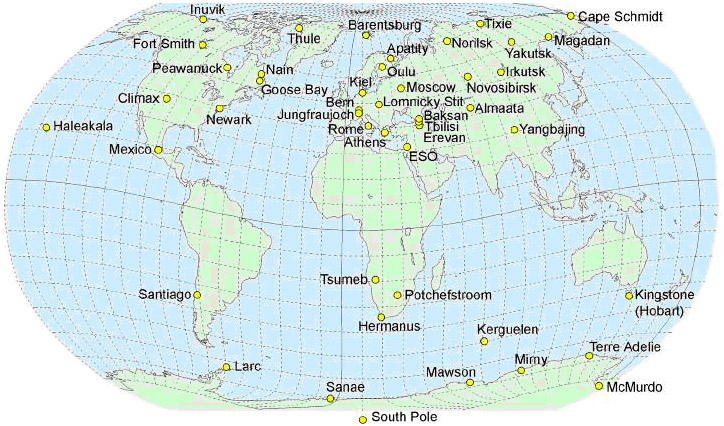 Cosmic rays (CR) in the vicinity of the Earth are a stream of nuclei of various elements with velocities close to relativistic and relativistic. The nuclear spectrum of CR is steeply falling, so about 92% of this flux is protons. Next come -particles and other nuclei. Radiation contains hard quanta, electrons, and neutrinos.

Supernovae are considered to be the main source of cosmic rays. This main part of cosmic rays is called galactic cosmic rays (GCRs). For some part of CR, the source is the Sun as a result of powerful solar flares. This part is called solar cosmic rays (SCR). GCR and SCR constitute the primary cosmic radiation.

Cosmic rays, to reach the earth’s surface, pass through a layer of atmospheric air equivalent to almost 15 nuclear runs. As a result of a nuclear cascade in the atmosphere, radiation is formed on the Earth’s surface, consisting of elementary particles, some of which were not in the composition of primary cosmic rays. The main components of secondary CR are electron-photon, meson and neutron.

In CR physics, there are 2 main areas of research:

– astrophysical (solution of questions regarding sources and variations (intensity changes) of CR).

Astrophysics of CR is a direction at the intersection of CR physics. astrophysics, geo- and heliophysics, space plasma physics. CRs are highly sensitive to electromagnetic conditions in outer space, since they are a stream of charged particles. The energy spectrum and nuclear composition of CR is not constant in time and space. The CR flux in interplanetary space is not strictly speaking isotropic. The presence of spatial anisotropy during the rotation of the Earth leads to daily CR variations. The CR intensity is strongly influenced by solar activity (SA). Significant variations in CR intensity, especially in the low-energy region, occur during periods of solar flares and magnetic storms. The CR intensity on the Earth’s surface is affected by processes on the Sun and in interplanetary space, as well as in the Earth’s magnetosphere and atmosphere. In CR physics, the observed intensity variations are divided into variations according to sources: interplanetary, magnetospheric, and atmospheric. Variations of interplanetary origin include 11-year and 27-day Forbush effects and solar flare CRs, as well as variations caused by plasma flows from the Sun (solar wind), coronal mass ejections, and other processes on the Sun.

Sporadic phenomena on the Sun are the cause of the formation of solar CRs, the intensity of which can increase at this time by several times (for example, on September 29, 1989, the increase in intensity at sea level observed in Novosibirsk was 183.9%), lead to geomagnetic storms, disruptions in radio communications, to malfunctions of technical systems, to the deterioration of the health of chronic patients. In addition to solving the problems of fundamental science, the study of CR variations involves solving the problems of diagnosing processes in the interplanetary medium, the possibility of predicting SA and sporadic phenomena on the Sun.

The results of observations of CR intensity on the Earth’s surface are posted on the Internet network of CR stations (includes 40 stations). Observational data is collected at the International Data Center (WDC) and is available to the scientific community.

• Read about cosmic rays on Astronet